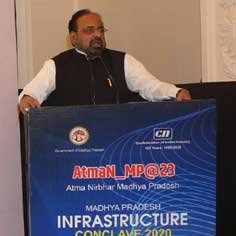 Public Works Minister Gopal Bhargav said that Madhya Pradesh will become the most developed state in the country in the next three years through the theme of Atmanirbhar Madhya Pradesh. In this, the role of industrial institutions along with strong infrastructure will be important.

Minister Bhargav said this on the occasion of the inauguration of Madhya Pradesh Infrastructure Conclave organized by Confederation of Indian Industries at Minto Hall, Bhopal.

Minister Bhargav said that the state has set new records in the field of infrastructure as well as agriculture, irrigation and industrial development after the year 2003. But development is a continuous process. When new technologies are invented, the order of improving resources continues.

He said that when Prime Minister Narendra Modi gave the vision of Atmanirbhar Bharat to the country, the roadmap for “Atmanirbhar Madhya Pradesh” was prepared by the Madhya Pradesh government under the leadership of Chief Minister Shivraj Singh Chouhan to achieve that goal, and work on it has also started at a rapid pace. Shri Bhargav said that it is appreciable that the target of 30 days (one month) given to all the departments has been met. The next target is 90 days (3 months) and 3 years. By the year 2023, all the targets will be fulfilled in Madhya Pradesh.

Minister Bhargav said that industrial institutions need to work in social sector along with industrial development activities. There is a need to create awareness among citizens regarding their social responsibility. Only then we will be able to achieve the goal of Atmanirbhar Bharat from Atmanrbhar Madhya Pradesh. He appealed to the industrialists taking part in the virtual conclave to participate in the development of the state with an open heart.

Additional Chief Secretary and Managing Director Narmada Basin Project Company Limited I.C.P. Keshari said that the whole world is facing the challenge of Covid in the present era. It also has an impact on India. Both the country and the state are moving ahead in powerful ways in this challenging time. He informed that over Rs 5 lakh crore has been invested in Madhya Pradesh and other sectors including infrastructure in the last 5-6 years. Roadmap to take it further has been prepared in the state.

At the outset, C.I.I. Madhya Pradesh President Anurag Shrivastava threw light on the outline and objectives of the conclave. Industry representatives taking part in the conclave offered their views and suggestions.