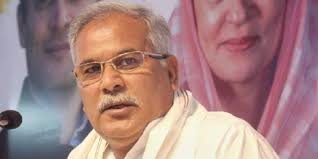 Chief Minister Bhupesh Baghel, on two-day tour, had left Raipur for Delhi by a regular flight on Thursday afternoon. The Chief Minister will meet three union ministers and participate in a meeting of senior Congress leaders during his Delhi visit.

The Chief Minister, while briefing media at Swami Vivekananda Airport, Raipur,  said that he would meet Union Minister for Road Transport and Highways Nitin Gadkari, Civil Aviation Minister Hardeep Singh Puri and Union Minister of Consumer Affairs, Food and Public Distribution Piyush Goyal in Delhi. He would hold discussion with the minister on road projects, Air Cargo Maintenance Centre and enhancement of procurement of rice of 60 lakh metric tonnes from Chhattisgarh in central pool.

Baghel said that he would participate in a meeting of senior Congress leaders in Delhi.

Replying to a query on gang-rape cases in Jashpur and Raipur, Baghel said that these rape incidents are unfortunate and stern actions are being taken by the police in these cases. Asked on farmers’ ongoing protest in Delhi, Baghel said that the Central government should fulfill the demands of the protesting farmers.

Replying to another query on BJP’s allegations in connections with Assistant Professor Exam-2019, Baghel said that if the BJP has no proof in the matter, it must show. The Chief Minister denied any irregularities committed in the Assistant Professor Exam-2019. The irregularities in exams conducted by the Chhattisgarh Public Service Commission (CGPSC) took place during the BJP rule, he added.