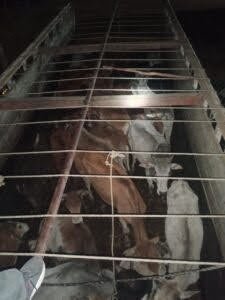 Bajrang Dal workers saved 65 bullocks and handed over the trucks, in which the cattle were being smuggled, to the police in Balodabazaar.

According to the information, two trucks laden with cattle was coming from the direction of Balodabazaar after midnight on February 18, 2021. The trucks were carrying the cattle to an abattoir. As Bajrang Dal District Co-Convener Ankit Dwivedi caught a whiff of the incident, he and other Bajrang Dal members intercepted the trucks MH-36-1943 and MH-30-L-1292at Keshla Petrol Pump Chowk.

Both trucks were laden with cattle. As many as 65 cows and bullocks were found cruelly stuffed in the trucks. The truck drivers couldn’t produce any legal documents about the cattle and confessed of transporting the cattle to the abattoir.

The accused men were booked under Sections 6, 10, 11 of the Chhattisgarh Farming Animals Preservation Act and Section 11 (C) of Prevention of Cruelty against Animals.