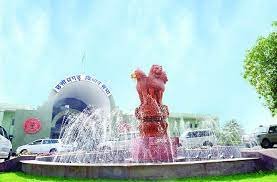 Speaker Dr Charan Das Mahant got annoyed during the proceedings of Zero Hour and remarked,  “I’m sitting in this class since 1980, I have knowledge of the rules, regulations and traditions by which the House is being run”.

Meanwhile, in another major development, the ongoing Budget Session, which is scheduled till March 26, is likely to be adjourned sine die on Tuesday, amidst COVID-19 scare and also due to impasse created by opposition Bharatiya Janata Party Legislators.

The opposition Bharatiya Janata Party raised the issue of suspicious deaths of five persons of a family through Adjournment Motion Notice during the Zero Hour. The motion was first taken up by senior BJP MLA Brijmohan Agrawal, thereafter the Speaker asked JCC (J) Legislative Party Leader Dharamjit Singh to read his Zero Hour notice on some other issue. After Singh read his zero hour issue, Leader of Opposition Dharamlal Kaushik and MLA Brijmohan Agrawal raised the issue that when the BJP Members were raising a significant issue by moving Adjournment Motion notice, then they should be allowed to speak rather than allowing other Members to raise different issues, which can be taken up later on. Agrawal said even House of Commons is run through traditions. This is an attempt to dilute the issue which the BJP is raising. Kaushik said they had moved Adjournment Motion notices and names of Members are mentioned in the notice, hence they should be allowed to speak first.

This enraged the Speaker and he remarked sharply that he has been in this classroom (House) since 1980. He has contested Legislative Assembly and Lok Sabha elections five times each and has knowledge of every rules, regulations and traditions. He said even he can also shout but he prefers to speak softly. To which, MLA Brijmohan Agrawal remarked as a Speaker he shouldn’t get annoyed. The Speaker then answered it is the question of dignity, rules and traditions, which needs to be complied with. Thereafter, the entire opposition BJP walked-out and boycotted the proceedings.

The speculations in this direction came to fore after a supplementary list of day’s business was issued by the Assembly Secretariat. As per the earlier issued list of day’s business, discussions were scheduled for demands for grants of four Ministers’ departments. But with the issuance of supplementary list, another four Ministers’ departments were added and with this the departmental demands for grants of all Ministers have been passed with voice vote. Thereafter, Chief Minister Bhupesh Baghel who holds the finance portfolio, tabled the Appropriation Bill, discussions for which will be held on Tuesday.

The Treasury Benches are also not in a mood to continue the House proceedings after two Ministers and two Legislator were found positive for Covid-19.