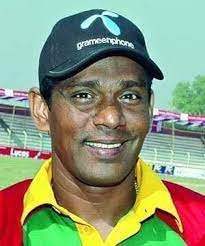 A much improved Bangladesh Legends and the West Indies Legends would be desperate to open their accounts when they meet in the 12th match of the Road Safety World Series T20 at the Shaheed Veer Narayan Singh International Stadium on Friday.

With both teams placed at bottom of the points table with nil points, the chances of the two teams making to the knockout stage of the tournament is not ruled out.

Another win by India Legends will see them through, too. Having played three matches each, West Indies and Bangladesh have lost all three games. The Windies, however, are slightly placed better than Bangladesh, thanks to net run rate.

Brian Lara-led West Indies last played their game on March 6 against Sri Lanka, which the latter won by five wickets.

Interestingly, Bangladesh’s previous one too was against the Emerald Isle team where they put up a much improved performance, despite being on the losing side.

Going by the team balance, Mohammed Rafique’s Bangladesh looks more balanced and formidable while the West Indies have some serious issues with their bowling.

The Caribbean outfit’s batting is much stronger than their bowling which not only lacks accuracy, but fitness of bowlers too.

Even though captain Lara scored an unbeaten half century in the last game, their team will heavily depend on the aggressive Dwayne Smith, who can change the course of the game with his attacking stroke-play.

Smith would be Bangladesh bowler’s primary target. As far as their bowling goes, the ultra-fit seamer Tino Best will have to take charge with the new ball and strike early blows to keep West Windies in the game.

Bangladesh, like West Indies, have similar issues in their bowling, however, they have some decent spinners at their disposal that can come handy on slow tracks of Raipur.

Their batting has been really impressive, especially opener Nazimuddin, who has been in top form. His half century against Sri Lanka will not just boost his own, but also his team’s confidence. Bangladesh has enough players who can play cameos when needed in the death, too.