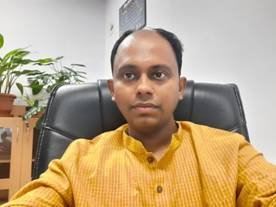 Delhi, Oct 5
Professor Kanishka Biswas, currently working as an Associate Professor at the Jawaharlal Nehru Centre for Advanced Scientific Research (JNCASR), an autonomous institute of the Department of Science & Technology, Government of India, has received the prestigious Shanti Swarup Bhatnagar Prize in Chemical Science for Science and Technology (2021) for his discoveries in the field of solid-state inorganic chemistry and thermoelectric energy conversion. His research involves a fundamental understanding of the relationship between structure and property of inorganic solids to develop lead (Pb)-free high-performance thermoelectric materials, which can efficiently convert waste heat to energy and are being translated into cost-effective technologies.

Using fundamental and insightful chemical principles, Kanishka Biswas has achieved an unprecedented thermoelectric performance through control of atomic ordering and consequent electronic state delocalization in a crystalline inorganic solid, simultaneously enhancing its electronic transport and reducing the thermal conductivity, which was published in Science journal this year.

His innovative strategies to tune the thermoelectric properties with chemical bonding hierarchy, ferroelectric instability, and rattling atoms in a class of chemical compounds called metal chalcogenides have advanced the frontiers of inorganic solid-state chemistry introducing new paradigms. Nearly 65% of all utilized energy gets irreversibly dissipated as waste heat. It is a dream to have an inorganic solid that recovers electricity efficiently from the wasted heat, which can then be reused to power our electronic gadgets, home appliances, vehicles and small industrial equipment. Thermoelectric materials discovered by Kanishka Biswas can directly and reversibly convert waste heat into electricity, and it will play a significant role in the future energy management. Further, the thermoelectric energy conversion does not emit any hazardous gas like CO or CO2. Thereby, high-performance thermoelectric materials made in Prof. Biswas’ laboratory will be beneficial in waste heat to electrical energy conversion in power plants like thermal, steel, chemical and nuclear; automobiles, space missions to chulas in rural India.

Kanishka hails from a small town Habra, near Kolkata, and developed his love for science early. With Honours in chemistry from Jadavpur University, he proceeded to his MS and Ph.D from Indian Institute of Science (IISc) Bangalore. During his postdoctoral research from Northwestern University, Chicago, he developed his area of focus in thermoelectric. Kanishka Biswas has several national and international awards to his credit. He has published 165 research papers, including over 10 papers in each of highest quality chemistry journals like the Journal of American Chemical Society and Angewandte Chemie on solid-state inorganic chemistry and thermo-electrics energy conversion in his independent career from JNCASR. His total citations and h-index are 13650 and 50, respectively.

He has received Swarna Jayanti Fellowship from DST. He is an invited fellow in the Royal Society of Chemistry (FRSC), UK. He serves as an Executive Editor in ACS Applied Energy Materials, ACS, USA and editorial advisory board member in several important journals.