Delhi, Dec 23
Vice President M. Venkaiah Naidu on Dec 22 stressed the need for better science communication in regional languages to reach out to people in their mother tongue and to inculcate a scientific temper among them. Recalling that the Constitution lists ‘developing scientific temper and the spirit of inquiry’ in people as a Fundamental Duty, Naidu called for increased efforts to popularise science through books, TV shows and radio broadcasts.

Reflecting on the impact of technology like Artificial Intelligence on people’s lives, Naidu said that science discourse now must become more inclusive and democratic. He called upon the scientific community to take the advancements in their fields closer to the people, suggesting they have a scientific social responsibility or SSR, akin to corporate social responsibility.

Recalling the contributions of Ramanujan, Naidu emphasised that it is our duty to recognise the contributions of Indian scientists and mathematicians to nation-building. “We must recount their inspirational stories to our youngsters and encourage them to take up careers in science”, he added.

Naidu paid tributes to the six scientists whose birth centenary Vigyan Prasar is celebrating – namely, Har Gobind Khorana, G. N. Ramachandran, Yelavarthy Nayudamma, Balasubramaniam Ramamurthi, G. S. Laddha and Rajeshwari Chatterjee – who were all born in 1922. He said that even though they were not provided adequate freedom, respect, and space to conduct their scientific studies under the colonial rule, they showed indomitable spirit in their scientific endeavour. Shri Naidu called upon educational institutions in the country to celebrate the lives and achievements of the six scientists in this calendar year.

The Vice President called for introspection in the field of STEM (Science, Engineering, Technology and Mathematics) and suggested that India must aim to become a world leader in scientific research. To this end, he suggested increasing public and private investments in R&D, encouraging scholars to publish papers in reputed peer-reviewed journals, resolving bottlenecks in the patenting regime and nurturing promising ideas that find wide applications.

Stressing on the importance of right talent in STEM, Naidu noted that the issue of gender divide in the field has to be addressed. He observed that even though the STEM field has more than 42 percent female graduates, only 16.6% women researchers are directly engaged in R & D activities. He called for creating an enabling environment so that more girls can take up careers in mathematics and science.

Noting that many children develop a fear for mathematics and science in schools, Naidu suggested arousing an interest in the subject through experiential learning methods. “Puzzles, demonstrations and other hands-on activities could be utilised to make children become friends with numbers”, he said. 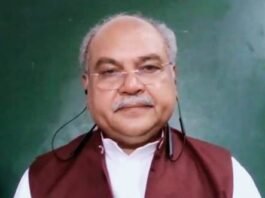