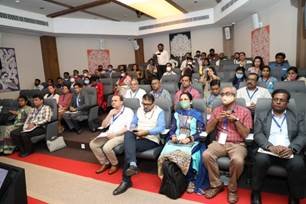 Over 1 crore persons screened under the initiative

Delhi, Aug 27
Ministry of Tribal Affairs and TB division of Ministry of Health and Family welfare organized a national conclave on 24th August at the National Tribal Research Institute (NTRI), New Delhi to disseminate the learnings of the 100-day Aashwasan Campaign under ‘Tribal TB Initiative’.

Tribal TB Initiative is a joint initiative of the Ministry of Tribal Affairs and Central TB Division, Ministry of Health, supported by USAID as technical partner and Piramal Swasthya as implementing partner.

The Aashwasan Campaign started on 7th January this year for active case finding for TB in 174 tribal districts of India, under the ambit of the Tribal TB Initiative. It was flagged off in Nandurbar District, Maharashtra. Under the initiative, door-to-door screening for TB was undertaken covering 68,019 villages. Based on verbal screening of 1,03,07,200

Addressing the event, Dr. NavalJit Kapoor, Joint Secretary, MoTA stated “The Aashwasan Campaign brought together about 2 lakh community influencers who wholeheartedly participated to make the campaign successful. These include tribal leaders, tribal healers, PRI members, SHGs and youth in the tribal areas- who were part of this campaign in the screening process and community awareness.” He complemented the efforts of Piramal Foundation and USAID who closely worked with Central TB Division, State TB Officers and District TB Officers. He further said that data indicates that the tribal communities are more vulnerable to respiratory diseases and TB, compared to other population groups. He asked all State Health departments to conduct Infrastructural gap analysis and seek funds from MoHFW and Ministry of Tribal Affairs through concerned Tribal Welfare Department of the state.

Sh. Vivekanand Giri, DDG Central TB division presented the Tribal TB Initiative of CTD. Dr Raghuram Rao, ADG said that the Central TB division is keen to work with tribal communities to address TB. With the data which has emerged through the Aashwasan Campaign, CTD will map TB hotspots and use that as the starting point.

Speaking on the occasion, Ms Sangita Patel, Director- Health, USAID India congratulated the Ministry of Tribal Affairs and the Ministry of Health on their commitment to address TB among the tribal communities. “It’s incredible when you think about what has been achieved with over 2200 members working at the community level. To think you were able to reach 10 million people, and from there actually identify 10,000 TB patients. I am heartened to see the commitment to go for 75 TB free tribal districts, but also to not leave behind the other tribal districts.”

As a way forward, to mark 75 years’ of India’s Independence, 75 high burden tribal districts have been selected for focused interventions in the coming months. A three-pronged strategy for the 75 Districts was presented, to be centered on:

Generating demand for TB services through continued engaged with community influencers who have been mapped during this process for community mobilization, increasing awareness on TB, symptoms, spread and treatment processes, and addressing stigma and fear associated with TB.
Improving the delivery of TB services by enhancing the TB testing and diagnosis infrastructure, leveraging PIPs and other sources of funding to address implementation gaps and provision of customized solutioning
Decreasing the risk of transmission and decreasing the pool of infections through active case finding campaigns
While presenting the way forward, Dr Shobha Ekka, Chief of Party, Piramal Swasthya, Tribal TB Initiative stated, “Piramal Swasthya is deeply committed to the health and wellbeing of the millions of tribal peoples living across India; and believes that TB-free tribal communities is the cornerstone of achieving a TB-free India”. Ms. Vinita Srivastava (Advisor Tribal health cell, Ministry of Tribal Affairs) and Dr Shailendra Hegde and Ashwin Deshmukh Sr VP, Piramal Swasthya attended the program. The event was also attended by State and District TB Officers, technical experts, community influencers and development partners,.